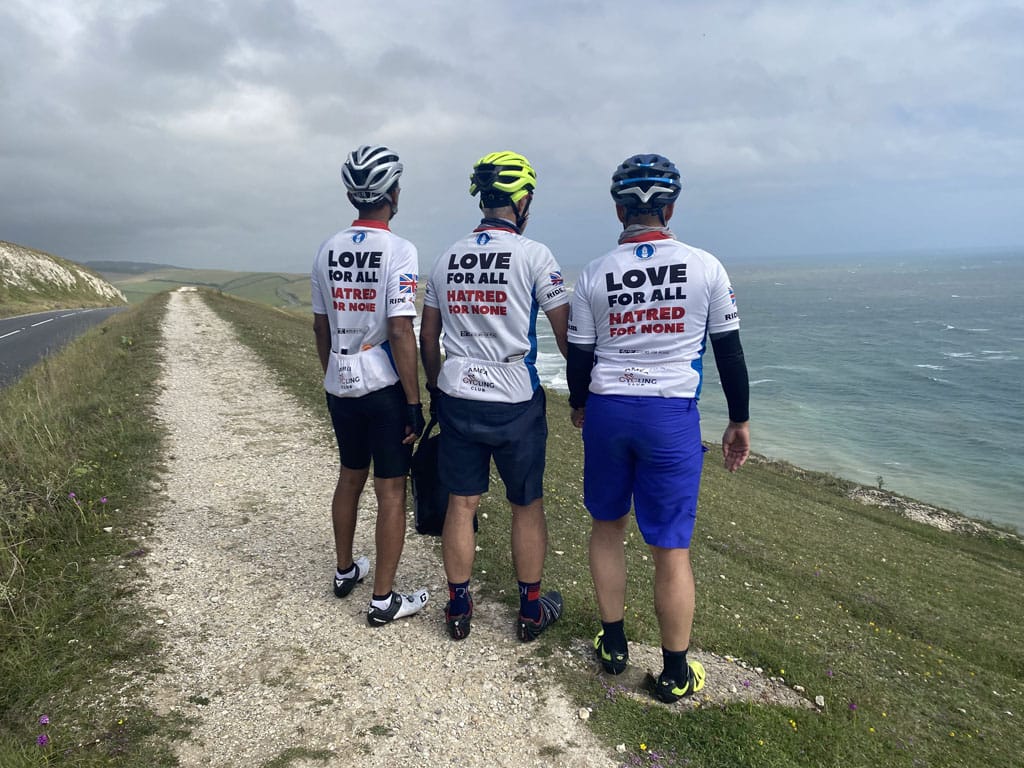 Event: Tour to Isle of White from Baitul Futuh

The first leg from Baitul Futuh to Farnham was a 38-mile route via Kingston, Hampton Court, Chertsey, Chobham, Brookwood, Ash, Tongham and finally stopping in Farnham at a Nasir’s house. After some lunch, the additional Nasir (Zakariyya Chaudhry-Farnham) also joined the group as planned. Sticking to a time schedule was essential in order to be able to catch the planned ferry crossing from Portsmouth Harbour, and consequently short breaks were pre-planned to occur approximately every 20 miles. The next stage had some of the more challenging hills to climb but the team of riders were in good spirits and motivated. The cyclists departed Farnham around midday following a Dua led by Murrabi Hafiz Ijaz Tahir sahib. The route went through Tilford and then up the challenging 2.5 mile climb through Beacon Hill. Although the weather forecast had predicted rain until late afternoon, by the grace of Allah and Huzur-e-Anwar’s prayers the forecasted rain turned out to be a cycling friendly cloud cover. As scheduled, after 20 miles a break was taken in a cornfield near the road to offer Zohr and Asr prayers and some food to replenish the cyclist’s energy ready for some further cycling and tough climbs. A short distance after departing for the last leg to Portsmouth Harbour, the cyclists encountered the big climb of Southdown Petersfield (also sign posted ‘Kill Hill’). Despite its gradient reaching a very steep 15% the team were able to reach its summit, Alhamdolillah. This was immediately rewarded with a scenic ride down the other side of the hill, through the serene and tree-lined quiet roads. By the grace of Allah, the group reached the ferry terminal as scheduled at around 17:15. The group bid farewell to the support vehicle team that had accompanied them all day.

After a 22-minute ferry crossing from Portsmouth to Ryde, and a further five miles by bike, the cyclists arrived at the campsite, stopping for dinner on the way. A bell tent with six beds and clean bedding had already been erected.

On the morning of Day 2, one more Nasir brother from London (Dr Kalim Sadiq- Malden Manor) joined the group, and the cyclists departed for the coastal cycle route around the Island. The option chosen was the coast-to-coast route covering the circumference of the island clockwise. It consisted of five big challenging hills, with the remaining sections that seemed to consist of numerous smaller hills with what seemed like no flat terrain! In total the 70-mile route consisted of an elevation of 4951 ft. Small breaks were taken every 10-15 miles in order to enjoy the beautiful country and coastal roads. The fifth hill was the most challenging just before the town of Freshwater, with the strong coastal crosswinds, the cyclists also had to ride up the 2-mile hill with an elevation that started at 240ft and reached 575ft at the top. Alhamdolillah, everyone was able to safely navigate to the top and rewarded with stunning views across the coast from the high vantage point.

The riders were all wearing the customised Jerseys’ with Love for All, Hatred for None wording, True Islam logo and Kalma wording. This attracted attention of public and some of us were asked about the Jamaat. By the grace of Allah, the ride became a source of Tabligh as well.

With an eye on the time as the ferry, time was drawing closer, and with no big hills remaining, it was decided to quicken the pace in an attempt to make it in time for the ferry departure. However, nature had a different plan and many smaller yet challenging climbs were encountered all the way to the ferry terminal, resulting in the planned ferry being missed! However, by the grace of Allah, all were able to board the later ferry. All were delighted to hear when informed by Hafiz Ijaz Tahir sahib that Hazur-e-Anwar had enquired about their progress on multiple occasions and therefore were in Huzur’s prayers, making this a very blessed and memorable trip. Alhamdolillah.

Share This
We use cookies to ensure that we give you the best experience on our website. If you continue to use this site we will assume that you are happy with it.Ok